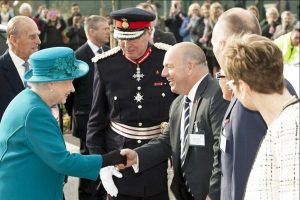 Joined by the Duke of Edinburgh, she was taking a behind-the-scenes look at both firms in her first visit to the city since 1994. The Queen was cutting the ribbon at JLR and officially opening ISP, which has moved its headquarters to the i54 from Walsall.

Integrity Security Group were requested to support the Police and Royal Protection to provide additional security during the event and to ensure the safety of all those attending.

We would like to thank the staff involved for representing the Company at this important event. We were pleased to receive compliments from the Police on the professionalism of our team.