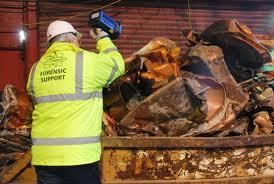 Due to a significant rise in value, metal has become a much sought after commodity. This increased demand has resulted in a sharp rise in metal theft nationally. Metal fencing, gates, manhole covers and other metallic items are stolen on a regular basis. Property is raided for lead, copper and cabling. War memorials and statues have been taken. Overhead power lines are stolen at serious risk to personal safety with huge costs for replacement and major inconvenience to the public. Historically the scrap metal trade has been a cash in hand industry. This creates difficulties as there is no audit trail, making identification of individuals who may be trading stolen metal or who may be committing tax or benefits fraud, a difficult proposition. An amendment to the Scrap Metal Merchants Act 1964 to prohibit cash transactions would make payment by cheque or directly into a bank account mandatory and would be a significant component in reducing metal theft.

I wouldn’t hesitate to recommend Integrity Security Group, I really can’t fault them.